You are here: Home / Tips and Tricks / Flipping videos on iPhone.

Flipping videos on iphone is a very useful function of some apps, as well as rotating and other basic editing tools. Sometimes, after taking a good photo or a video, you find out a problem – it needs to be mirrored or is not oriented right. How do you flip a video on iPhone? Actually, in most cases, there is a simple solution. Though some videos may require more editing than others. If you ask:” How do I rotate a video on iPhone?”, then look no further than to this page! For information on this, and also on how to flip, or how to mirror a video on iPhone using several simple apps, see below.

Flip, rotate, or mirror a video: what’s the difference?

The three terms above may need some explanations. Are flipping and mirroring the same thing or not? How does rotating differ from them?

Rotating a video consists of turning all the frames in it 90 degrees, clockwise or counterclockwise, until it has the right orientation. The same can be done with a photo. Flipping and mirroring are actually the same things – producing a horizontal or vertical reflection of the photo or video.

Simple operations like rotating or flipping videos on iPhone can be done with free applications that will be described below.

How to rotate a video in 3 easy ways

Let’s see how to rotate a video on iPhone. Sometimes, videos or photos may end up having the wrong orientation. Fixing this problem can be especially important if you intend to post them on social media. Thankfully, if you need to rotate a video, iPhone apps like iMovie, Video Rotate + Flip, or just iOS Photos that come with your device may be of help.

1. Rotate your video in iPhone Photos

The simple photo and video editor that already comes installed with your iPhone can be sufficient for this task.

Start the app, and open the video in question. First, tap Edit, and then the crop icon in the lower part of the screen. In the upper-left corner, you will see the rotation icon – square with an arrow near one of the corners. Pressing it will turn the video 90 degrees, you may need to tap multiple times before the video is oriented properly.

Then, the Done button will save the fixed video in the photo library. 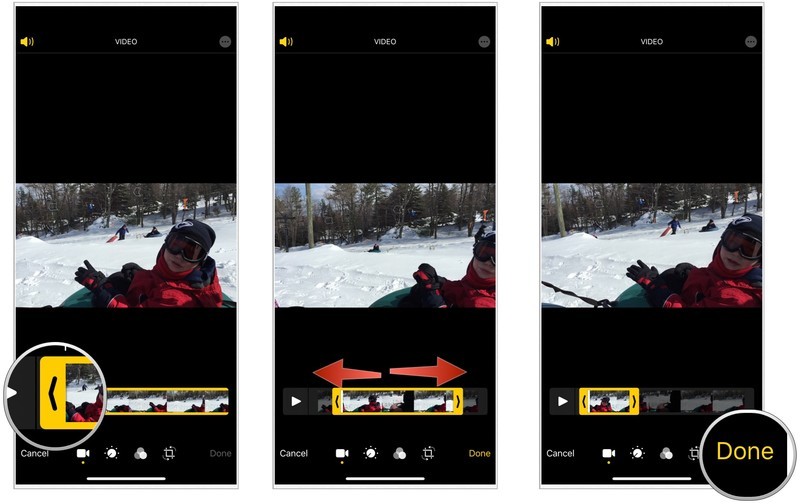 2. Rotate the video in iMovie for iPhone

Another free video editing app is iMovie. It’s quite simple but has tools that are not available in the Photos app. In particular, it can be used to make a longer video by connecting several smaller clips. Rotating videos in iMovie isn’t hard:

First, download iMovie from App Store if you haven’t done it yet. Open it, and press the + icon. Choose Movie. Select the video clips that you want to use. They will be shown on the display. Scroll them and choose the one that needs to be edited. Touch the screen with two fingers and rotate the image until it has the necessary orientation. Then press Done. 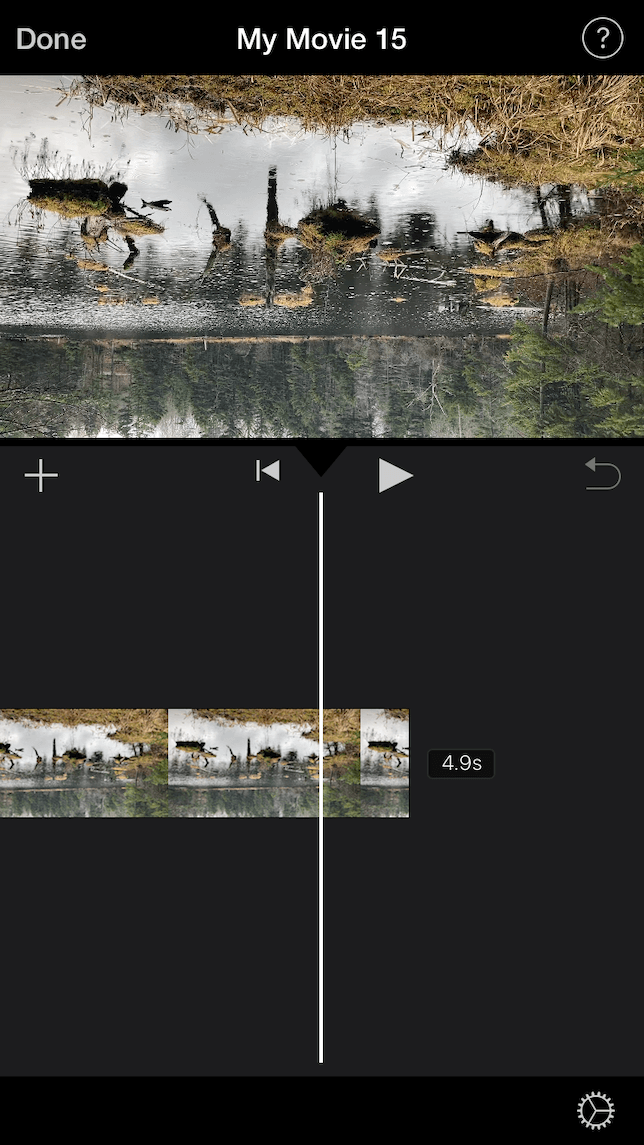 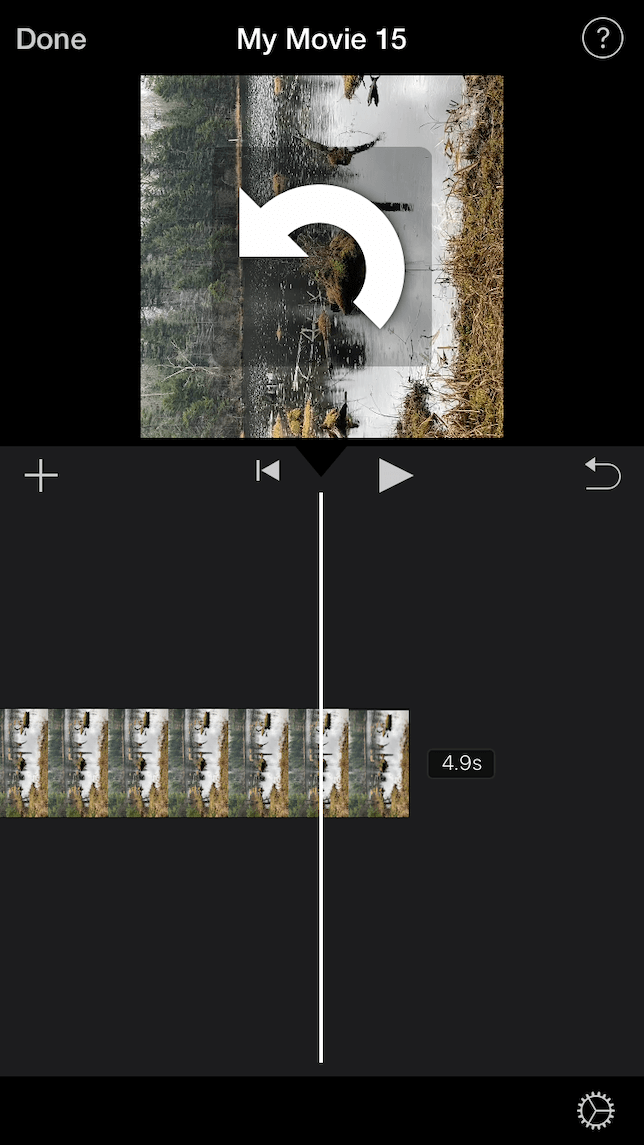 Another free app that was created for rotating and flipping videos is aptly named Video Rotate + Flip. Using it is very easy:

Download and open it. Pressing the arrow icon lets you select the video that you want to edit. Several icons on the top of the screen allow you to flip or rotate the video. First, four of them turn the video 90 or 180 degrees clockwise or counterclockwise. After editing the video to your satisfaction, tap Save Video to Library. 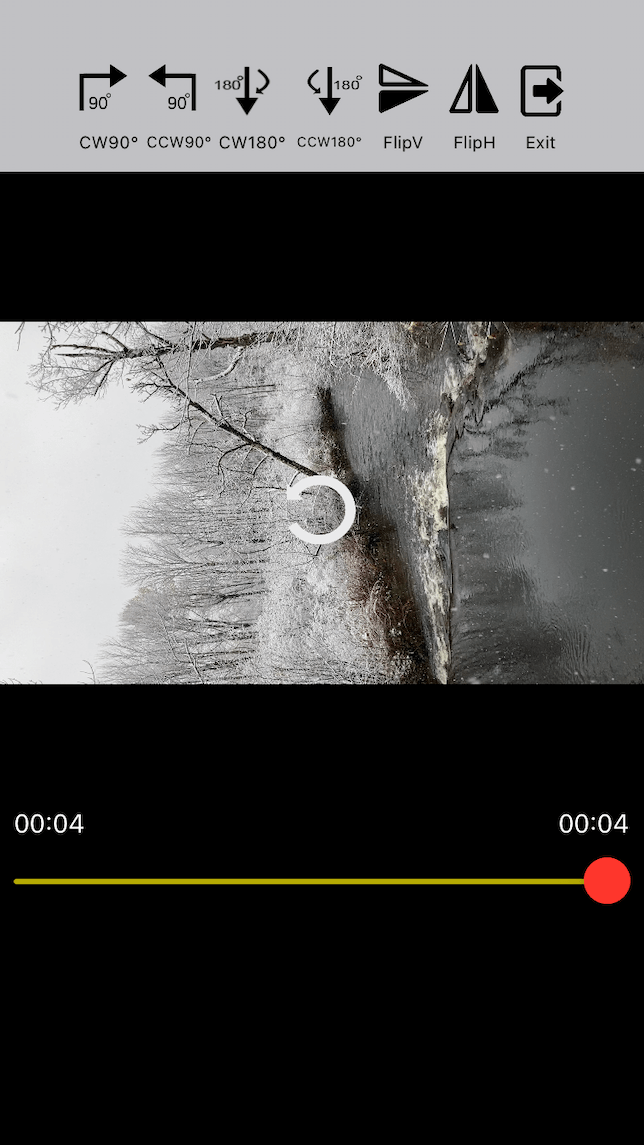 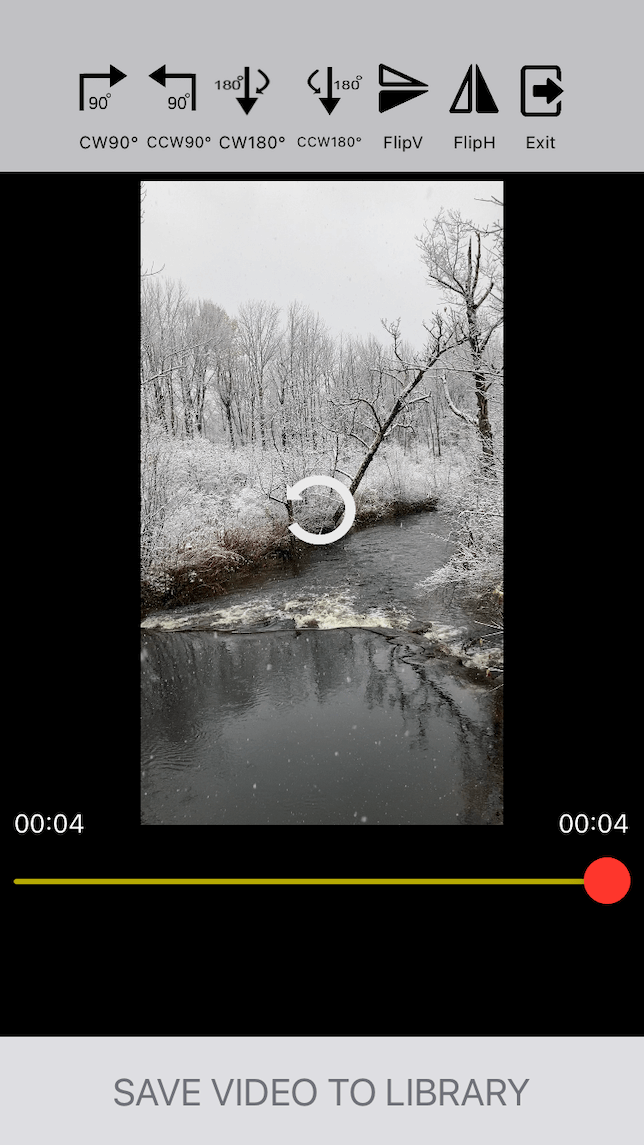 Can you turn a vertical video into a horizontal one?

Yes, it is possible. However, the transition is not lossless, so there is a chance that the result will be somehow disappointing. Changing the format can be done with the Photos app that comes with your device:

First, open the video that you need to edit in the app. Tap the Edit button, and then the crop icon in the lower part of the screen. The resize icon, looking like rectangles of different forms inside one another, is in the upper right corner of the screen. On the bottom, you can select aspect ratio as well as landscape or portrait orientation. The video can be then dragged to control the cropping. You can scroll through it to ensure that the important part will stay inside the frame. When the result is satisfactory, press Done. 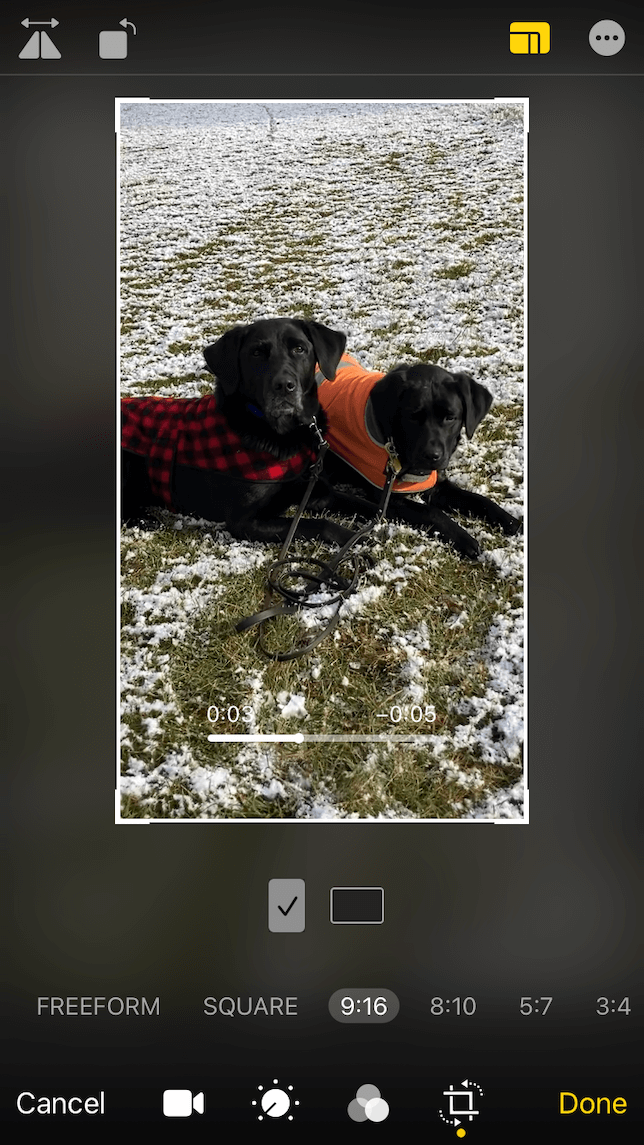 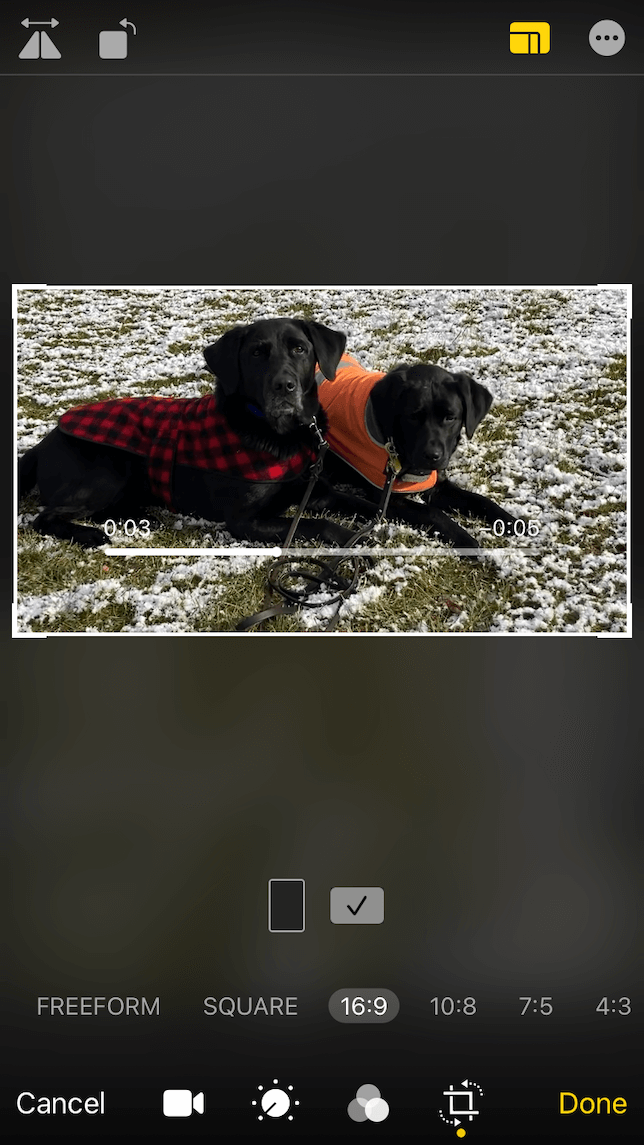 How to: mirroring and flipping videos on iPhone

Sometimes, in particular, after taking a selfie with a mirror, it can be useful to flip a video or photo, reflecting it horizontally. The above-mentioned free apps can be used for this purpose too. Read about how to flip an iPhone video below.

Flipping videos on iPhone can be easily done with the Photos app and is similar to rotating them.

Open the video that you want to flip in the app. Tap Edit, and then the crop icon around the lower right corner. The flip icon looks like a triangle and an arrow above it. Press it, and then tap Done.

If you need just to flip videos, an app like Photos may end up good enough, making installation of third-party products unnecessary.

Figuring out how to invert photos on iPhone is also quite simple, as it can be done with the same app and the process is similar to the videos. 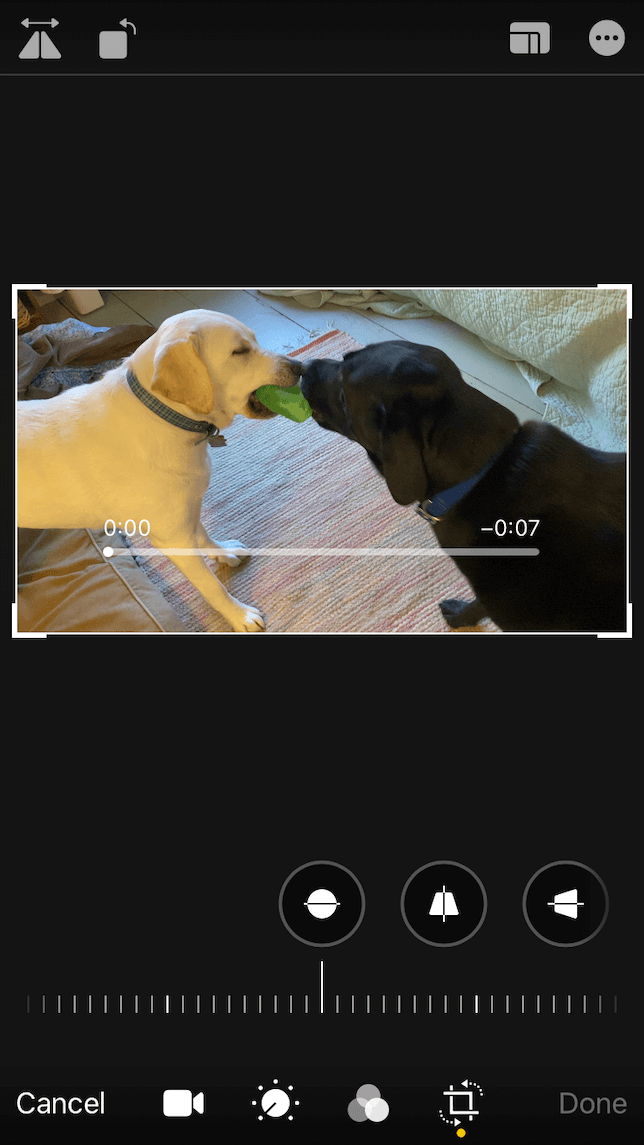 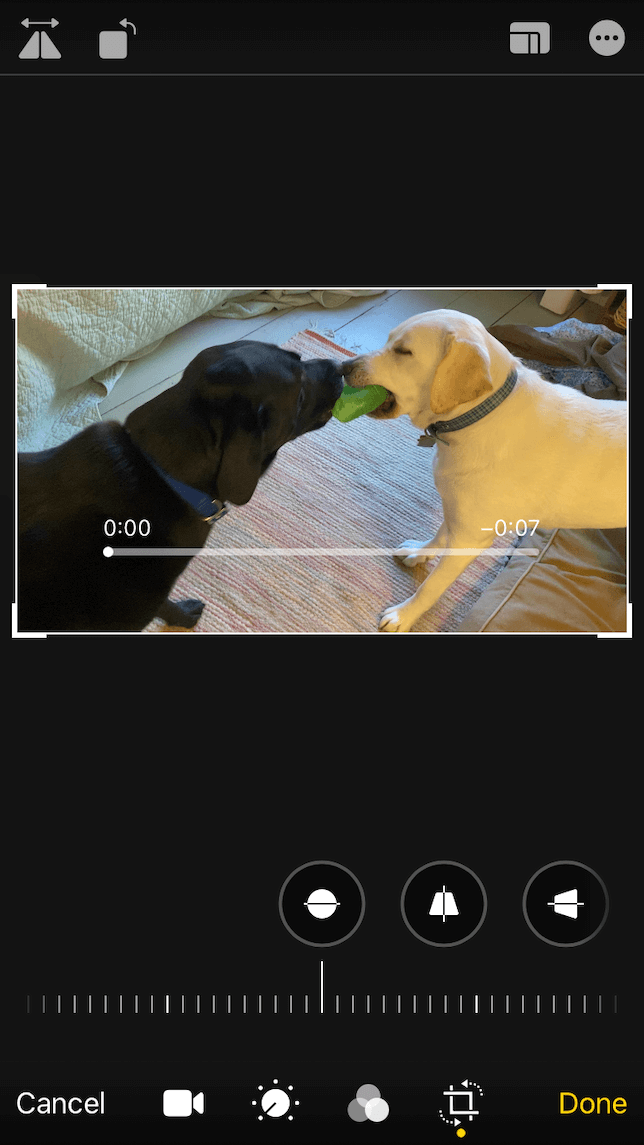 Let’s also take a look at how to mirror a video in this app. The app is easy to use, and the method is similar to the rotation of videos described above.

Start the app, and then open the video by pressing the arrow and choosing it.  In the upper-right part of the screen, you will see two triangle-shaped icons, responsible for reflecting the video vertically or horizontally. Apply the needed edit, then tap Save Video to Library. 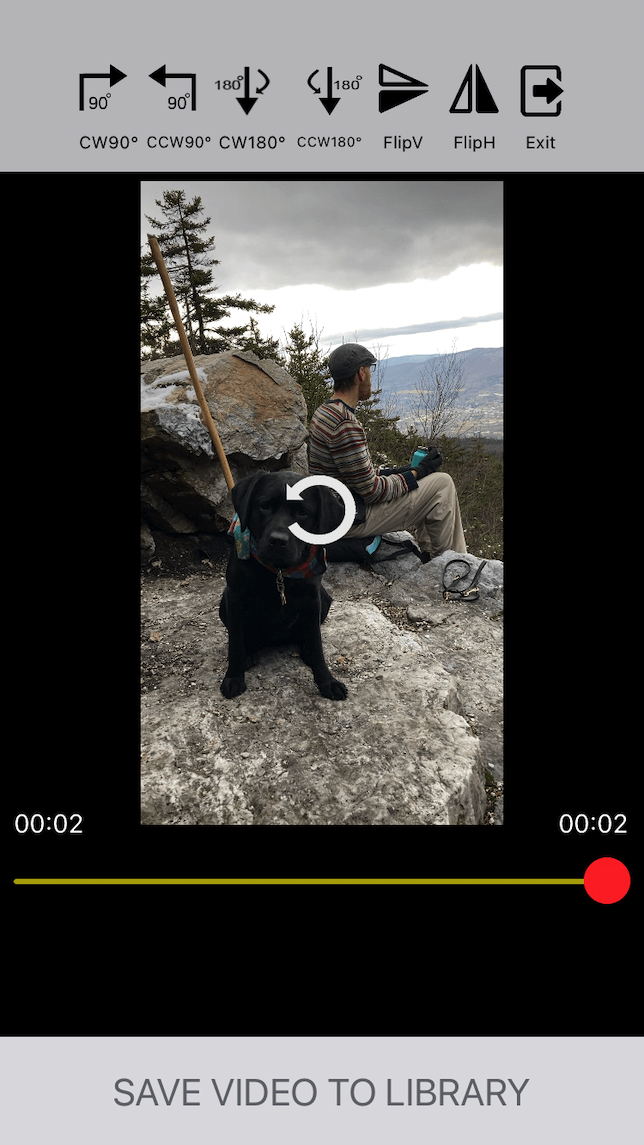 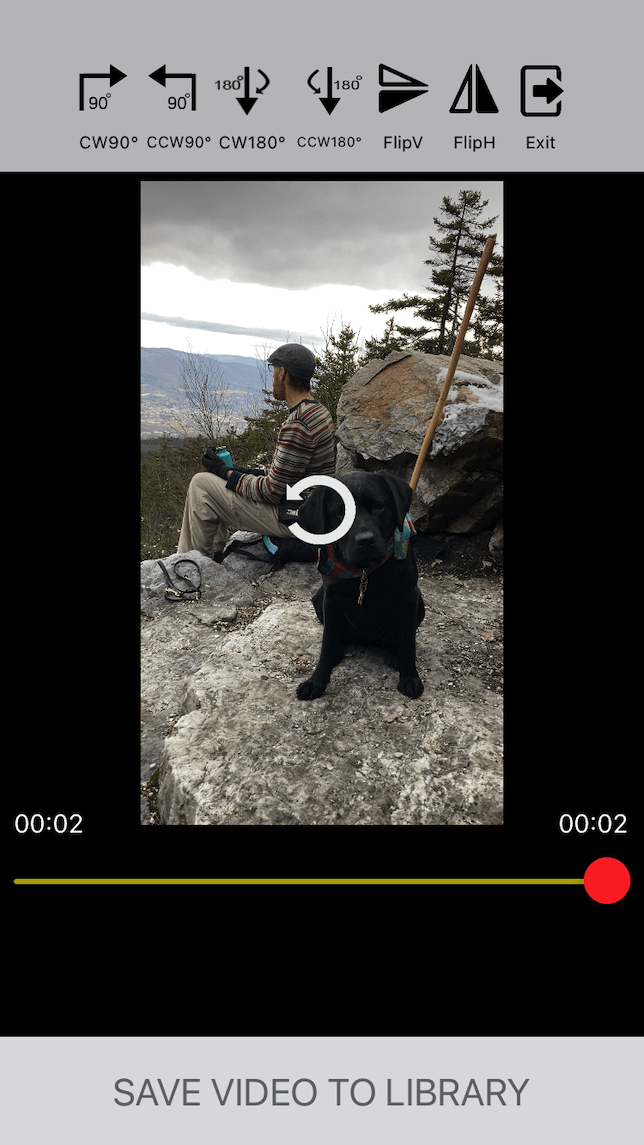 As you see, rotating, cropping, and flipping videos on iPhone is easy. Now, you will not have a problem with applying basic edits like flipping or rotating to your videos, as it can be done with an app that already comes preinstalled on your iPhone or ones that can be downloaded for free.

HOW TO SET UP VOICEMAIL ON IPHONE 8 : SIMPLE GUIDE

How Do You Know Your iPhone Is Charging- iPhone 8, iPhone 8 Plus- Tech Guide