You are here: Home / Tips and Tricks / How to change carrier name iPhone

To change carrier name iPhone needs to be jailbroken. It should work for old iPhone OS versions from 3.0 to 7.0.   Also, as the app that we use for this task is available on Cydia, you need to have that stored on your device. Let’s see how to do it in a few simple steps. Also, optionally, you can do the same with time in the status bar. 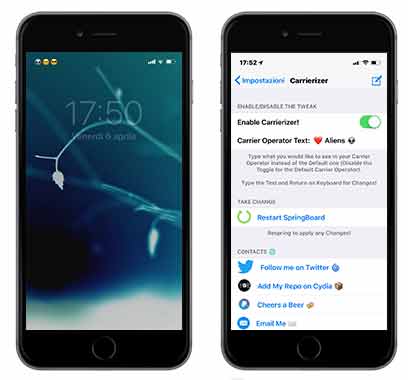 Open the search, and enter the app name.

When you change carrier name iPhone will instead display the replacement text until the changes are canceled. So, if you wish to return your status bar to a standard look, you simply can just launch the app again as described above, select fake carrier or fake time, and instead of typing a custom text press the “reset” button.

Now, we have seen how to change your carrier name on your iPhone. After all, if you still have an old iPhone well after its warranty expired, is there really any reason not to jailbreak it and try some new customization? After all, even if something will go wrong, not only the price of the used devices goes down, reducing the risk, but their incompatibility with modern apps makes them less and less useful. So, why don’t you do something that you would consider too risky when the device was way more valuable? You will be able to tweak your Apple device in many new exciting ways after jailbreak. Some may affect functionality, and others are cosmetic. In particular, this small guide tells you how to change your carrier name, replacing it with some other text.

THIS IS HOW TO HIDE CONTACTS IPHONE 8 FOR GREATER PRIVACY

How to Stop Sharing Location Without Them Knowing?

Apple iPhone 8 Wi-Fi Sharing Guide: How to turn on Hotspot on iPhone 8?